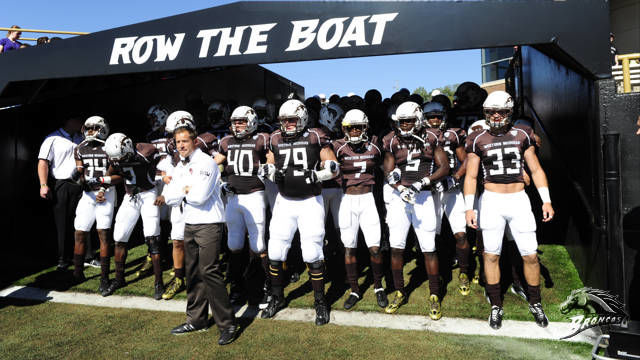 Note: This is a follow up to a two part series regarding the 2014 Marshall football season.

When the College Football Playoffs (CFP) was created it was championed as a milestone that greatly improved college football. This was due in large part to the CFP replacing the unpopular BCS System. The BCS was a lightning rod for criticism because it failed on two fronts. The order in which it ranked the best P5 teams was subject to intense scrutiny while also becoming notorious for not including the top G5 programs.

The CFP increased the number of teams able to compete for a championship, replaced computers with a committee, and brought an unprecedented emphasis on strength of schedule that college football quickly adopted. These changes had a wonderful impact on removing controversy regarding the top teams selected to compete for a national championship. However this came at the cost of making the other issue of G5 inclusion far worse.

Historically the G5 has rarely been included in title contention because even in the event a G5 school wins every game they played, they are deemed not worthy for a chance at the national championship because of their perceived weaker strength of schedule. By increasing the emphasis on strength of schedule this problem has become an even bigger issue. In order for a postseason system to truly work it at the very least needs to give every team a path to the national championship. Otherwise it would mean nearly half of FBS would be mathematically eliminated from title contention before a single game is played. 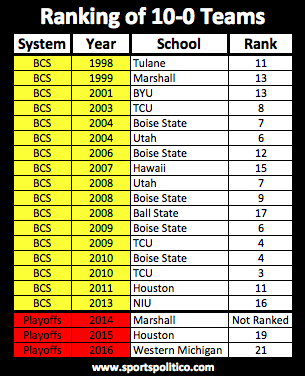 This was the major flaw of the BCS and yet that system which was notorious for its harsh treatment of G5 schools ended up being significantly more favorable to the G5 than the CFP. During the BCS era 17 non-AQ schools (the previous term for G5 schools) were able to make it to 10-0. In the BCS rankings after those teams reached that milestone they had an average ranking of 9.5 and the lowest rated team was Ball State in 2008 at 17. Under the CFP three G5 teams have accomplished this milestone. The Committee responded by not even including one of them in the rankings and placing the other two schools at 19 and 21.

The stats show a clear difference between the CFP and the BCS. The worst ranked team under the BCS would have been the highest ranked team under the CFP. Using the AP poll as a comparative benchmark we can look at how the BCS and CFP compared. What we see in the second graph is that the BCS had very little difference compared to the AP. Only six schools were ranked lower in the BCS than the AP poll. Of those six only Ball State in 2008 was more than two spots lower (at three spots lower). Compare that to the CFP where the three G5 teams are six, seven, and in the case of Marshall at least eight spots lower. This essentially means that a G5 school under the CFP has faced more discrimination than any two schools faced under the BCS combined.

It is without doubt that the G5 is being penalized by the CFP. But the question should be whether this is warranted. One major argument in favor of the status quo is that if the G5 wants to be included in the playoffs they should schedule tougher teams. I disagree with this for two reasons.

The first reason is that the G5 is at a massive disadvantage when it comes to scheduling power programs. The CFP Committee is actively encouraging G5 teams to play more P5 teams while simultaneously telling the P5 to play less G5 teams. That translates into the G5 having less options for playing the P5. Even when a G5 team is able to schedule a series with a P5 program it is rarely on equal terms. So G5 athletic directors are at the mercy of the P5 and have a limited ability to find a quality P5 matchup.

The second reason is that when we say “play tougher teams” there is no specific benchmark as to what that means. In 2016 Western Michigan played two P5 programs and was still given an unfavorable ranking. In 2015 Houston not only played two P5 programs, but played in the most respected/strongest G5 conference. That year Houston’s conference (AAC) did incredibly well with Temple, Memphis, and Navy all earning rankings in the AP poll. But Houston was still given a lackluster CFP ranking despite having one of the better schedules a G5 school could be expected to have. If Houston couldn’t get a favorable ranking, then it’s hard to expect any G5 school would under normal circumstances. Meanwhile Marshall’s case is even more extreme as it is highly unusual for an 10-0 team to not be ranked.

There are two atypical circumstances where a G5 program will make ground in the rankings. The first is when the G5 program had a successful showing the previous season such as a one loss season and/or a major bowl win. The other time is because of scheduling is when they play (and beat) a ranked P5 program in the regular season.

But these are atypical because only a handful of teams are ever in a position to do this. Only one G5 team a year is going to make a NY6 bowl. With only 25 ranked teams there simply aren’t enough ranked P5 programs so that every G5 program is playing one in the regular season. The only way every G5 program would be able to play one is if the NCAA dictated the out of conference schedules and specifically tailored them to make sure each G5 program plays a quality P5 program (which is never going to happen). So this goes back to the issue of mathematically eliminating teams before the season has begun.

Even worse is that a top P5 program has no incentive to play a top G5 program. If they win it does nothing for them because they were supposed to beat that team anyway. If they lose it is one of the biggest upsets of the season. So the strong G5 programs where this issue matters most are the programs at the biggest disadvantage of finding a quality P5 program to play. This also doesn’t address another issue of programs getting unlucky when the quality opponent they scheduled picks the current season to have an “off year” where they are not as strong as they usually are. A program then loses their quality opponent through no fault of its own. In the current landscape of college football schedules are often made five to ten years in advance meaning programs are even more prone to this.

The end result is that a G5 program isn’t going to win a title based on one good season. Said program needs their University administrators to have made smart scheduling decisions at least five years ago and their team from last season to have a strong showing. This essentially means their current team alone does not control their own destiny. To say a team is not in control of it’s own destiny at the start of the season is a massive flaw in any system.

The other major defense of the status quo that I disagree with is the idea that “it will work itself out by the end of the season.” In other words that because Marshall in 2014 eventually lost the low ranking they had prior to said loss is no longer relevant. Or if Western Michigan won their next two games they would have a massive jump in the rankings and the problem would correct itself.

I disagree with this logic because every weekly ranking matters. A middle to high level ranking is a rarity for most G5 programs. It is often a milestone for the program that gives them an opportunity to rally additional fan support, receive additional attention from recruits, and it procure in donations. So when they are robbed of a respectable ranking you are still taking away from the program.

I also think of the CFP rankings as an institution. We look at stats in the major football polls such as “number of times ranked” or “number of top ten rankings” to compare programs. The same can be said for counting tournament bids and Final Fours in college basketball and bowls in college football. While fans love to do this, it is often a flawed methodology. The NCAA basketball tournament, bowls, and the major polls have been heavily altered throughout their history. They have been so heavily altered that they lack the consistency to fairly count accomplishments.

As a new institution the CFP rankings would be the first metric we have ever had in either college basketball or college football that would use modern standards in its very first ranking. This gives it a longevity that would allow fans several decades from now to fairly compare today’s programs to future programs. For example the CFP ranking is the first ranking system to exist entirely as a top 25 ranking. The AP, Coaches’, and even the BCS did not start out as top 25 ranking. They eventually expanded to 25 teams on top of radical changes to their methodology.

The CFP ranking is something that I expect to last for decades and needs to be treated as such. The CFP is undermining the legitimacy of their rankings. The first way in which they did this was releasing them on a weekly television show. This short sighted decision was nothing more than a cash grab that undermines their legitimacy by opening up the rankings to accusations of fishing for controversy for better ratings. The second issue is the committee has the tendency to preference a less popular choice who has little chance of making a conference championship game over a more popular choice with a strong chance of making one (Texas A&M verse Washington in 2016). The only reason for doing this is because they can use the “13th data point” to resolve the problem. It turns the ranking into a projection-based index or power ranking which isn’t appropriate for the official system of college football. And now we see them discriminating against the G5 at an unprecedented rate.

College football fans should care about these issues because the Coaches’ and AP voters will look at what the CFP rankings are doing and adjust accordingly. It is also becoming increasingly apparent that the CFP Committee are unlikely to consider an undefeated G5 program. While the Committee can do whatever it wants, it seems unlikely they will factor in Western Michigan’s next three wins and give them a 17 spot jump. Earning such an increase this late in the season by playing three straight G5 programs would be unprecedented for the sport and thus unlikely to happen.

While I understand why most believe an 11-1 or 12-2 P5 program should get the fourth playoff spot over an undefeated G5 program with no quality wins, the fact remains that for better or for worse Western Michigan and Michigan belong to the same level of college football. Therefore both programs deserve a chance to control their own destiny.

Like what you see? Check out more sportspolitico™ articles below.